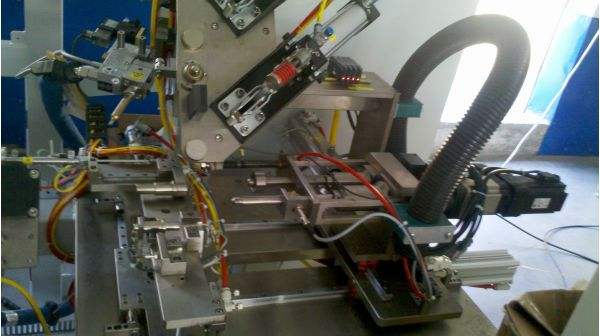 The tightening of bolts for assembly in the machine industry is a common phenomenon. Previously, people only considered screwing bolts (or nuts) to the tightest extent during assembly. Later, people discovered that this "tightest" is just a very vague concept, which varies from person to person. There are dozens of machines, and hundreds of parts are bolted and assembled. In large production, it is done by most people at different times. How to effectively control the "tightening" and make it "best" has become a topic of great concern to the machinery industry. In this way, not only the discussion and application of the tightening control method has become a hot topic, but also the application of the automatic tightening machine has become increasingly widespread.

China's research on tightening technology is mainly based on the introduction of Japanese standards, digestion and absorption, and proposed the national standard equivalent to Japan's 1990 standards. This series of national standards also includes the following three national standards: GB/T16823.1 -1997 "Cross-section area and bearing area of â€‹â€‹threaded parts"; GB/T16823.2-1997 "General rules for fastening of threaded fasteners"; GB/T16823.3-1997 "Test method for tightening of threaded fasteners". As with the reference and adoption of standards, the research on tightening technology in China's auto industry is in the initial stage of imitation and imitation. In production, some powerful automakers have achieved torque tightening by purchasing expensive imported electric tightening equipment. Some manufacturers have realized the torque-turning process. Individual manufacturers have begun to apply the yield point tightening process, but they are still in the exploration stage. Chinese manufacturers are not able to independently develop and develop electric tightening equipment and tools that are suitable for advanced tightening processes such as corners and yield points.

Throughout the development level of tightening technology at home and abroad, with the continuous improvement of the level of bolt manufacturing, developed countries such as Europe, the United States and Japan have vigorously studied and promoted the yield point tightening process. The domestic comprehensive promotion of the torque-turning method, the study of the yield point method, narrowing the gap with developed countries.

The essence of the bolted joint is to reliably couple the two workpieces together by controlling the axial preload of the bolt to an appropriate range. In order to ensure the rigidity, sealing, anti-loose ability and fatigue strength of the tensioned bolt of the threaded joint, the accuracy of the pre-tightening force of the joint bolt is quite high. Due to the vibration and alternating load, as well as the influence of temperature, the threaded joint often occurs automatically loose. This can be avoided by improving the tightening of the bolts. There are many tightening control methods to achieve this preload, such as a simple wrench tightening manual method, a torque control method, a superelastic control method, a yield point tightening method, and the like.

The following is a brief introduction to several common bolt tightening control methods:

The change in the torque factor K is related to the smoothness of the thread surface and the seating surface, the lubrication condition, the tightening speed, and the tightening tool used. At the same time, this K value is also related to the temperature. After the Sumitomo Corporation of Japan passed the experiment, the torque coefficient K decreased by 0.31% for every 1 Â°C increase in ambient temperature. Therefore, if the bolt is tightened by the torque method, the calculated load requires 1.3 times the maximum working load.

In summary, the advantages of the torque control method are: low cost, you can use a simple tightening tool torque wrench to check the tightening quality. The disadvantage is that the tightening accuracy is not enough, the material potential cannot be fully utilized, and the environmental impact is large (temperature, bolt thread, impurities, bumps, etc.).

In view of the shortcomings of the torque tightening method, the United States began to study the relationship between bolt elongation and axial force in the late 1940s. The torque-rotation control method is to first tighten the bolt to a small torque, which is usually about 25% of the tightening torque value. From this point on, the method of controlling the specified corner angle is tightened.

The torque tightening method is based on a certain angle of rotation, which is a certain axial elongation of the bolt and the connecting member is compressed. The purpose of this is to screw the bolts to the close contact surface and overcome some of the unevenness of the surface irregularities, while the axial clamping force required later is generated by the corners. After calculating the rotation angle, the influence of frictional resistance on the axial clamping force no longer exists, so its accuracy is higher than the simple torque control method. The key point of the torque control method is to measure the starting point of the rotation angle. Once this rotation angle is determined, we can obtain Quite high tightening accuracy.

Torque-angle control method (TA) advantages: high tightening precision, stable tightening quality, low friction coefficient of screw has little effect on tightening quality; can fully utilize the bearing capacity of bolts; bolt can be screwed to plastic deformation zone without twisting, design The pre-tightening force can take 80% of the yield strength of the bolt. A large axial clamping force can be obtained. Disadvantages: The control system is more complicated. It is necessary to measure the pre-tightening torque and the corner data. The quality department is not easy to find an appropriate method to check the tightening result.

The biggest advantage of the yield point tightening method is that it is not affected by the friction coefficient of the torque control method and the starting point of the rotation angle control method. The bolts with different friction coefficients are tightened to the yield point, maximizing the potential of the thread strength. Thus, the fatal shortcomings of the torque control method and the corner control method are overcome, and the assembly precision is improved; however, it is sensitive to the interference factor, and the performance and structural design of the bolt are extremely high, and the control is difficult. Therefore, the price of the tightening tool is very expensive.

A captive bolt pistol (also variously known as a cattle gun, stunbolt gun, bolt gun, or stunner) is a device used for stunning animals prior to slaughter.

The principle behind captive bolt stunning is a forceful strike on the forehead using a bolt to induce unconsciousness. The bolt may or may not destroy part of the brain.

The bolt consists of a heavy rod made of non-rusting alloys, such as stainless steel. It is held in position inside the barrel of the stunner by means of rubber washers. The bolt is usually not visible in a stunner in good condition. The bolt is actuated by a trigger pull and is propelled forward by compressed air or by the discharge of a blank round ignited by a firing pin. After striking a shallow but forceful blow on the forehead of the animal, spring tension causes the bolt to recoil back into the barrel.

The captive bolt pistols are of three types: penetrating, non-penetrating, and free bolt. The use of penetrating captive bolts has, largely, been discontinued in commercial situations in order to minimize the risk of transmission of disease.